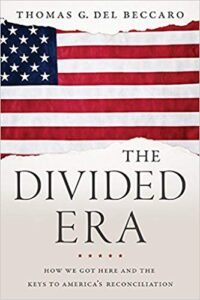 Acclaimed author, speaker and former California Republican Party chair Tom Del Beccaro made a bold prediction almost exactly one year ago: Bernie Sanders would be the Democrat-ic nominee in 2020. In our country’s current anti-establishment, divided era, Sanders has gained momentum since 2016, and Del Beccaro expertly outlined five key differentiators that could very well propel Sanders to the 2020 Democrat nomination: https://www.foxnews.com/opinion/bernie-sanders-will-be-the-democratic-nominee-here-are-five-reasons-why.

“Going into Super Tuesday, of all the Democrats running right now, Sanders has the most committed supporters and the largest number of volunteers,” according to Del Beccaro.

Best known for his insightful commentary and public speaking on topics ranging from for-eign policy to economic reform, Del Beccaro has the unique ability to place our current times in the broader sweep of American and world history.

He does exactly that in his latest book, The Divided Era: How We Got Here and the Keys to America’s Reconciliation. That our country has become one obsessed with choosing sides is nothing new, he explains. Del Beccaro examines the three most divisive periods of our past and contrasts those eras with our country’s two most unifying periods. The result is a fasci-nating study of the history of political unity and division in the U.S., from the Revolution to the adoption of the Constitution; the Civil War through Reconstruction; and The Gilded Age to our present Divided Era.

By using the country’s past to inform a path forward, Del Beccaro is no stranger to seeing his predictions in the political arena become reality. In 2012, Tom correctly predicted the Demo-crats would lose over 60 House seats when others predicted more than 30 seats lost. He is poised to make hundreds of appearances on news programs as the 2020 election unfolds, sharing his insights and outlook on one of the most divisive, hotly contested elections in our nation’s history.

Thomas Del Beccaro is an acclaimed author, speaker and columnist for Fox News, Fox Business and the Epoch Times. The former Chairman of the California Republican Party and former U.S. Senate Candidate from California, Del Beccaro is also the author of The New Conservative Paradigm and is the publisher of PoliticalVanguard.com, where he and other columnists publish daily commentaries. 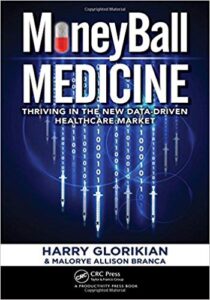 When a new viral outbreak such as coronavirus occurs, having the right data and knowing how to use it can be the keys to containing the crisis — and saving lives. With accurate data, we can identify new threats, warn at-risk populations, mobilize a rapid response, and develop effective diagnostic tests and vaccines.

In MoneyBall Medicine: Thriving in the New Data-Driven Healthcare Market, Harry Glorikian (along with Malorye Allison Branca) show through examples what a new data-driven healthcare system could look like when implemented on a global basis. The authors reveal where data and cutting-edge analytics are already advancing healthcare and creating new and evolving business opportunities. MoneyBall Medicine includes interviews with dozens of healthcare leaders, and describes the business challenges and opportunities arising for those working in one of the most vibrant sectors of the world’s economy. The authors map out many of the changes taking place, and describe how they are impacting everyone from patients to researchers to insurers, and outline some predictions for the healthcare industry in the years to come.

MoneyBall Medicine makes a compelling case for embracing technology and the use of data to revolutionize the healthcare system for the greater good of patients and healthcare professionals alike.

Author Harry Glorikian also hosts the MoneyBall Medicine™ Podcast, a series all about the data-driven transformation of the healthcare and life sciences landscape. An influential global business expert with more than three decades of experience building successful ventures in North America and across the world, Glorikian is well known for his achievements in the life sciences, healthcare, diagnostics and healthcare IT industries. He is a sought-after speaker who has addressed the National Institutes of Health, Molecular Medicine Tri-Conference, World Theranostics Congress and other audiences worldwide. He holds four US patents in telecommunications with others pending.

He has written numerous articles for industry publications, appeared on CBS Evening News, and has been quoted regularly by Dow Jones, The Boston Globe, BioWorld Today, Los Angeles Times, London Independent, Medical Device Daily, Science Magazine, Genetic Engineering News and many other media outlets. He is also the author of Commercializing Novel IVD’s: A Comprehensive Manual for Success.

For more information, please visit www.glorikian.com, or listen to his podcasts at https://glorikian.com/podcast/. 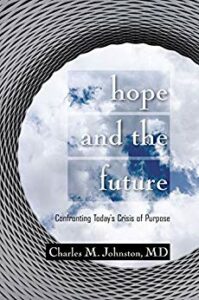 The defining crisis of our time isn’t growing authoritarian regimes, economic uncertainty or even climate change. It is a crisis of purpose. Our hope for the future will ultimately depend on how we best conceive of progress if our actions are to result in real human advancement.

In Hope and the Future: Confronting Today’s Crisis of Purpose, the first of a three-part series, Dr. Charles M. Johnston contends that much of civilization lacks a narrative, a compelling human story that can propel us forward. The challenges we face require that we think, act and relate in new ways, he says, and the critical questions before us require that we “grow up” as a species in order to deal with these challenges effectively.

Among the critical questions the book tackles are: How do we best ensure a safe human future in a world filled with weapons of mass destruction? How do we address inevitable environmental catastrophes? How do we make love endure in the future with gender roles in flux today? How will we deal with important challenges that require global cooperation, such as terrorism and the need for a stable economic infrastructure? How do we make moral choices, given their growing complexity and the weakening of cultural guideposts? And finally, how do we best determine if our actions result in real human advancement?

Dr. Johnston’s book distills 30 years of work by the Institute for Creative Development, a Seattle-based, non-partisan think tank and center for leadership training. It introduces the “creative systems” concept of cultural maturity and provides a compelling guiding story for going forward.

Author Charles M. Johnston is also a psychiatrist and futurist, and is best known for founding and directing the ICD and is the originator of Creative Systems Theory, a comprehensive framework for understanding purpose and change in human systems. He is the author of 10 books and numerous articles on the future and how we can best prepare to meet it. 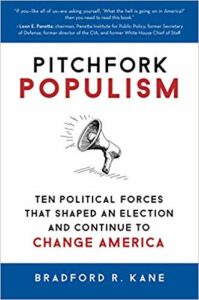 (This press release may be reprinted in part or in its entirety by any print or broadcast media outlet, or used by any means of social media sharing.)

What political, social and cultural forces led to the election of President Donald Trump? Polit-ical analyst Bradford R. Kane explores 10 dynamics of American politics and society that played a role in the 2016 presidential election and continue to influence our politics in his ground-breaking book, Pitchfork Populism: Ten Political Forces That Shaped an Election and Continue to Change America. Some of these dynamics have deep historical roots, such as the cultural divide between those who define our national identity in terms of rugged indi-vidualism versus those who emphasize community collectivism. The author notes that these opposing viewpoints helped craft our national identity as far back as the 1700s. He also con-siders the consequences of changing demographics, which will have a profound effect on community relations and politics.

Kane foresees a return to established policy processes and governing principles after the Trump presidency, as opposed to rule based on a president’s personal interests. He anticipates greater empowerment of the electorate as more demographic groups are increasingly enfranchised. Kane also forecasts the potential impact of recent developments on the 2020 election and beyond. Other topics discussed are the role of the media, accountability, globalization, the future of bipartisanship and more.

Bradford R. Kane has served in the US Congress as Legislative Counsel to Congresswoman Cardiss Collins; as Counsel to the House Energy and Commerce Subcommittee on Commerce, Consumer Protection; and as a member of President Clinton’s Task Force on Health Care Reform. Thereafter, he served the State of California as Deputy Controller, Legislation, and subsequently, as a Deputy Secretary of Information Technology. He was also a member of the Nielsen Media Research Task Force on Television Measurement; created the Bipartisan Bridge (a public policy initiative to advance bipartisanship in American government); and developed environmental and economic equity initiatives. In the global arena, he was CEO of the International Commission on Workforce Development, a Strategy Council member of the United Nations Global Alliance on ICT & Development, and Director of Strategic Initiatives and Director of International Development at TechSoup Global.

To connect with Bradford Kane, please visit his website at: www.pitchforkpopulism.com. 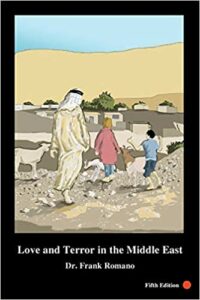