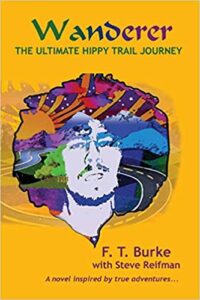 During the chaotic latter days of the Vietnam War, after the protest march on Washington, D.C., many American youth asserted their rebellious free-dom by doing drugs, having sex, sleeping outside and backpacking through Europe, North Africa and Asia. Still living at home was Steve, a young man coming of age, just out of col-lege, with no clear future and unable to pay rent. Envious of the free-spirited revelers, Steve, who adopted the nickname “Woodstock” after attending the music festival in New York, joined the throngs of intrepid youth to wander the world and search for his soul.

Wanderer – The Ultimate Hippy Trail Journey by F.T. Burke and Steve Reifman, follows Woodstock’s year-long journey to scratch his nomadic itch. Upon beating the draft, Wood-stock crosses the Atlantic to the Old World, without any particular itinerary, no set time to re-turn home and not much money. He finds God everywhere no matter how hard he tries to hide and look away. His spontaneous, free-wheeling adventures of raucous, hilarious inci-dents all weigh heavy against the need to come home and grow up.

Wanderer will appeal to the wanderlust in the souls of hippies young and old. A fast read with a lot of laughs, the story was inspired by the true adventures of the co-author. Come along for this unforgettable adventure of a lifetime.

Author F.T. Burke is a lifelong resident of the state of Michigan, with his wife, Lorie. He en-joyed a prior career in the high-tech sector, serving as a systems engineer and project man-ager. Burke’s debut novel, The Bohemian Adventure, traces the journey of one who meets up with devoted deadheads who followed the psychedelic rock group, the Grateful Dead. He is currently developing two more books to be published in 2019.

Steven W. Reifman is a practicing lawyer and businessman. He took a journey similar in time and place to that of Wanderer’s main character, Woodstock. Steve was born and raised in Detroit, Michigan, and has three children, two grandchildren and an enduring, love-filled mar-riage of over forty years.