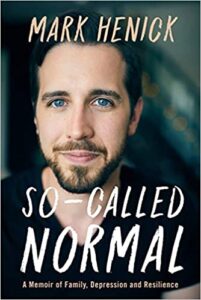 Mark Henick stood precariously on the wrong side of the railing on a crumbling, concrete overpass. The bridge spanned two realities and, for Henick, had become a symbol of escape — in one form or another. A voice behind him tried to help. A crowd gathered. Siren lights flashed in his peripheral vision. Surrounded but still alone, Henick let go.

So-Called Normal: A Memoir of Family, Depression and Resilience from Mark Henick is a vital and triumphant story of perseverance and recovery by one of North America’s foremost advocates for mental health

Henick’s near-death experience on the overpass that night would alter his emotional orbit just enough that his exit from a psychiatric ward following that suicide attempt in 2003 would be his last. His transformation didn’t happen overnight — it was a gradual process punctuated with new challenges and setbacks — but slowly, his patterns reversed and he began a profound, “upward” spiral toward recovery.

So-Called Normal chronicles Henick’s youth and the events that led to that fateful night on the bridge and the experiences and transformation that followed. It is a vivid and personal account of a boy who had to deal with the breakdown of his parents’ marriage, an abusive stepfather, bullying and trauma — all while trying to navigate his progressively worsening mental health. In the backdrop is a community that didn’t talk about mental illness, one where silence and maintaining the comforts of “normal” was paramount. So-Called Normal is not a “misery memoir” about suicide — it’s a gripping, inspirational story of survival.

Author Mark Henick’s TEDx talk about being saved from death by a stranger is one of the most watched in the world and has been viewed millions of times. His search for “the man in the brown jacket” whose bravery and strong arms kept him from falling to his death went viral around the world (and was successful!). Henick has been on television and radio and has written many articles on mental health. He has hosted more than 60 intimate conversations about mental health with notable public figures and celebrities on his podcast, So-Called Normal, and has executive produced and hosted the Living Well podcast for Morneau Shepell. Henick has served on the board of directors for the Mental Health Commission of Canada, and was the president of a provincial division of the Canadian Mental Health Association — the youngest person in either role. He has worked as a frontline clinician, a program manager and the national director of strategic initiatives for CMHA. Currently the CEO and principal strategist for Strategic Mental Health Consulting, Mark Henick is in high demand as an international keynote speaker on mental health recovery.