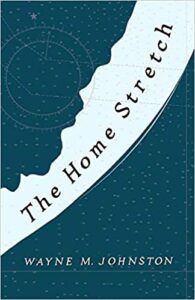 The diagnosis of leukemia at age 43 laid bare a brief flirtation with escape for Bill Smith. After all, he had battled depression and suicidal thoughts from a young age; mortality was really nothing new for him to grapple with. To put it bluntly, for Bill Smith, the end had always been in view. But that life-defining moment — that brief descent into darkness — triggered a profound fight for survival.

The Home Stretch, from award-winning author Wayne M. Johnston, features everyman Bill Smith (loosely based on Johnston himself), who, throughout his life, is confronted with extraordinary circumstances. His is a coming of age story in which the peace that allegedly comes with maturity is often shunted aside to make room for yet another crisis. It is also an uplifting story in its candid, reality-based portrait of a man struggling to find personal integrity through challenging conditions.

From an early age, Bill grapples with depression. Raised in a religious cult, he cannot reconcile his own experience with the worldview of his parents, and although he’s bound to them by love and obligation, he rejects their beliefs. His father’s palpable disappointment in Bill leads him to contemplate suicide and to provoke his father into a confrontation with a surprising outcome that would redefine their relationship and alter the course of both of their lives.

Given to a physical, adventurous life, Bill becomes the chief engineer on a seagoing tugboat, and his tales of weathering gale-force winds and violent storms at sea provide metaphorical undercurrents for his fraught relationship with his father, his failed early marriage, his father’s descent into Alzheimer’s and his own battle with leukemia, which he is told will kill him. Just when Bill has come to believe he has put the worst of it to rest, he learns something more about his father that opens everything up again, except this time, Bill’s sister is the victim.

The Home Stretch is a poignant, ultimately inspiring coming of age story that weaves themes of mortality and forgiveness through life-defining moments of reckoning that many adults have to face head-on and learn to overcome.

Wayne M. Johnston taught English, Creative Writing and Publications at La Conner High School for 19 years. Prior to that, for 22 years he worked on tugboats, usually as chief engineer, towing freight barges between Canadian and West Coast American ports. In 2011, he won the Soundings Review First Publication Award for his essay, “Sailing,” and has published other essays locally. For his debut novel, North Fork, he drew from years of experience reading student journals to reproduce the way kids voice serious matters to a trusted adult. The Home Stretch is book two in a planned trilogy. North Fork was released in 2016 as a YA novel. The story is told through the voices of three 17-year-olds as journal entries for their English class. Bill Smith, the protagonist in The Home Stretch, is their English teacher, and The Home Stretch is his back story.

Johnston lives with his wife, Sally, on Fidalgo Island in Washington State where he is working on another book length project. Connect with the author on Facebook (