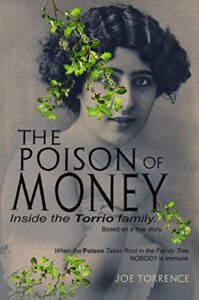 Joseph never suspected that he was the descendant of a Mob boss. And not just any Mob boss. Al Capone’s boss, Johnny Torrio, to be exact.

Joseph is just an average kid from an Italian middle-class family — one in which high morals and family values are instilled at every opportunity. But as he ages into his teens, he becomes inexplicably drawn to lives of the rich and famous. Fueled by a viewing of The Godfather, Jo-seph’s fascination with the Mob and the American Dream is ignited. Is wealth the barometer for success or the root of all evil? In his search for the truth about his great-uncle, Joseph discovers that the thin blue line between good and evil often becomes blurred.

The Poison of Money from Joe Torrence takes readers, for the first time ever, behind the scenes and into the personal life of real-life Chicago Mob boss Johnny Torrio, the most ob-scure figure in the history of the Mafia. But this is no conventional Mafia tale.

Instead, Torrence uses the protagonist, young Joseph, to paint a thought-provoking picture of the internal struggle many of us face between the pursuit of riches and what we’ve been taught all our lives about the evil and venom of money.

When Joseph stumbles upon a long-hidden newspaper clipping headlined “The Mafia at War” in his father’s nightstand, he uncovers a shocking reality: His great-uncle was one of the most powerful men of the 20th century, Chicago Crime Boss, Johnny Torrio. He was also Al Capone’s mentor. This life-altering revelation spurs Joseph’s quest to learn the unvar-nished truth about his family.

Joseph’s search for answers unlocks the door to let you inside the Torrio family. Johnny Tor-rio’s only blood sister, Marietta Torrio, a woman of virtue, is finally introduced to the world. Separated as toddlers, the road to the reunion of these two siblings from two completely dif-ferent worlds is rocky to say the least. Does Torrio’s “occupation” bestow unimaginable curs-es upon the family? Who is blocking this reunion?

Joseph’s fact-finding mission becomes an epic family journey that spans decades and crosses continents. There will be eye-opening revelations when he rattles the family tree, but for him, there is no turning back.

Author Joe Torrence is an accomplished businessman who some may say inherited the business acumen and street savvy of his great-uncle, Johnny Torrio. Except that there is one major difference between the two men. The author took the straight road, as he also inherited and readily embraced the morals, honesty and integrity of his grandmother, Marietta Torrio, Johnny Torrio’s only blood sister. Coincidentally, the author, like Torrio, prefers to remain in the shadows … at least for now.