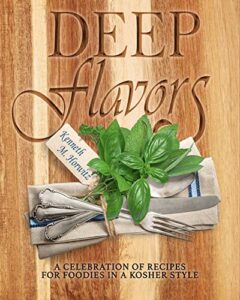 (This press release may be reprinted in part or in entirety by any print or broadcast media outlet, or used by any means of social media sharing)

Lovers of kosher cuisine as well as non-Jewish foodies and vegetarians will find an abundance of tempting and unusual recipes between the covers of Deep Flavors: A Celebration of Recipes for Foodies in a Kosher Style from Kenneth M. Horwitz.

Between the covers of Deep Flavors, Horwitz combines his hunger for cooking with his passion for making international and regional favorites accessible for home cooks including those who prefer to observe some or all of the rules for kosher foods.

The Texas State Fair Blue Ribbon-winning Spinach/Mushroom Lasagna, for instance, is a completely vegetarian lasagna accessible to Jews, vegetarians and foodies, with a unique twist on ingredients that gives it a complex flavor profile. Even recipes for classic foods such as brisket and roast turkey contain newly imagined taste combinations and techniques to elevate them while maintaining recognizable hallmarks of each dish.

The Beet Borscht, a family recipe from Horwitz’s grandmother, is somewhat unusual in that it is vegetarian. “A non-Jewish friend almost refused to eat it because he does not like beets; he had a third helping that evening,” Horwitz shared.

Woven throughout this eclectic anthology of Jewish family recipes and original kosher dishes are flavorful reminiscences and insights about food, sourcing ingredients and preparing meals in a kosher style — all from the perspective of a southern Jew.

Horwitz’s goal was to create recipes that are easy to read and easily followed by anyone with a basic knowledge of cooking.

“Too many existing recipes, whether online or in print, leave out critical stages or ingredients, assuming that the reader will instinctively know what to do next,” Horwitz added.

Horwitz’s reinterpretation of traditional Jewish dishes plus other regional and international favorites delivers a diverse menu of recipes that will appeal to broad audiences everywhere — Jewish and otherwise.

Author Ken Horwitz has spent 51 years as a CPA and lawyer in a general tax and transaction practice, where he developed a creative and focused approach to finding and fixing problems — a skill that translates well to the development and modification of recipes based on traditional (and nontraditional) family favorites.

His professional drive and the care given to his work have earned him multiple awards, including the Honorary Fellow for a lifetime of distinguished service and the 2017 Chairperson of the Year by the Texas Society of CPA’s. Currently residing in Dallas, Texas, Horwitz enjoys sharing his passion for cooking with his wife and his children’s families. Horwitz believes that one of the highest compliments he has received came from a longstanding client who uses numerous lawyers. He said, “Ken, you are the only lawyer we use whose work we have not had to fix.” Horwitz’s goal is for Deep Flavors to reach that same standard.