Betrayal, Infidelity Lead to Murder in Crimes and Passion 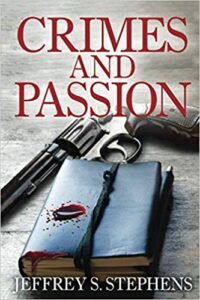 Betrayal, Infidelity Lead to Murder in Crimes and Passion

Elizabeth Knoebel expected her appointment that night to provide another juicy entry in her private diary, aptly entitled Sexual Rites. But a shadowy figure, watching from the edge of her property, has other plans. Instead of an evening of pleasure, Elizabeth is confronted by someone who wants to put an end to her destructive behavior — and succeeds.

Crimes and Passion is the gripping mystery-thriller from Jeffrey S. Stephens, effortlessly weaving suspense and sensuality with psychological undercurrents.

Elizabeth’s murder investigation is turned over to Lieutenant Robbie Whyte, a former New York City cop now serving on the force in affluent Fairfield County, Connecticut. Whyte understands that the appearances of the privileged gentry are often far removed from reality, and this certainly proves to be true in the case of Elizabeth Knoebel, who Whyte discovers was under the care of psychotherapist Dr. Randi Conway.

The secrets of Crimes and Passion are peeled away one layer at a time as readers meet an assortment of Dr. Conway’s patients — one of whom may have been Elizabeth’s killer. With Dr. Conway unwilling to betray her patients’ confidences, Whyte’s investigation gets complicated, putting the therapist herself in more danger as Whyte gets closer to the truth, and to the doctor herself.

With a pacing that mirrors Whyte’s frantic search for the truth, Crimes and Passion keeps readers guessing as each revelation unfolds. And along the way, readers are shown glimpses into the dynamics that cause marriages to succeed, to fail or sometimes, to end in tragedy.

Author Jeffrey S. Stephens lives in Greenwich, Connecticut. He is also the author of the Jordan Sandor espionage thrillers, beginning with Targets of Deception and, most recently, Rogue Mission. Crimes and Passion is the first in a planned series featuring Lieutenant Robbie Whyte.