Written by Trish Stevens. Posted in General, Music, Other, Woman 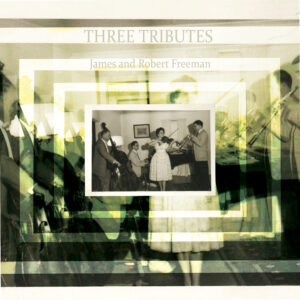 For brothers Robert and James Freeman, who are both accomplished musicians, music and family mean everything. To honor their family’s musical legacy, which spans three generations, the brothers commissioned three breathtaking, original scores included on Three Tributes, a music CD (with an accompanying booklet), which would make a welcome addition to anyone’s collection of beautiful new music.

Three Tributes features award-winning composers Kevin Puts, Andrea Clearfield and Gunther Schuller, along with a host of world-class performers. The CD will immerse listeners in the magnificent sounds of an emotional violin solo, stunningly prestissimo strings, and the layered splendor of four hands on two pianos.

For Robert and James, a music CD seemed an appropriate way to honor their family’s multigenerational love and appreciation of music. Their parents, Henry and Florence Knope Freeman, were both children of musicians and graduated from the Eastman School of Music in Rochester in 1930.

Both Robert and James studied piano and theory at Cambridge’s Longy School while graduating from Milton Academy, and studied performance during the summers at Tanglewood, Blue Hill and Marlboro. They went on to Harvard, where each graduated with honors, followed by travelling fellowships for study in Europe.

Robert took his Ph.D. in music history at Princeton and taught there for five years before moving to MIT, where he made tenure just before moving for 24 years to the directorship of the Eastman School — his parents’ alma mater — followed by two years as president of the New England Conservatory and six as dean of the College of Fine Arts at the University of Texas at Austin.

James went straight from Harvard to Swarthmore College, where he taught and conducted for 37 years, served as departmental chair for 16 years and as Daniel Underhill Professor of Music. In 1988 he founded Philadelphia’s new music group Orchestra 2001, directing it until 2015 when he resigned to take on a new ensemble, Chamber Orchestra FIRST EDITIONS. In 1991 he was a Fulbright lecturer and conductor at the Moscow Conservatory, and has returned to Moscow many times since then to give concerts of new American music.

Both brothers have made lots of recordings, and have published their share of well-reviewed books and articles. When the idea arose to commission some original scores to honor their family legacy, Robert and James sought out music’s finest to bring their vision for Three Tributes to fruition.

Two of the composers featured on the CD have won the Pulitzer Prize. Kevin Puts is currently at work on an opera for the Metropolitan Opera. Andrea Clearfield, who took her DMA at Temple, is the founder of the Philadelphia Salon Concert Series, featuring contemporary, classical, jazz, world and electronic music, together with multimedia and spoken word arts. The late Gunther Schuller was one of the 20th Century’s music stars as composer, conductor, author and administrator. He was a great admirer of their father’s bass playing, and a good friend.

Robert and James hope that Three Tributes will inspire others to undertake similar projects. Neither of them is aware of any similar event in the history of music where two brothers from a family of professional musicians — spanning at least two generations before them — have commissioned significant works as a tribute to their parents and for future generations to enjoy.